Why Do We Fidget? 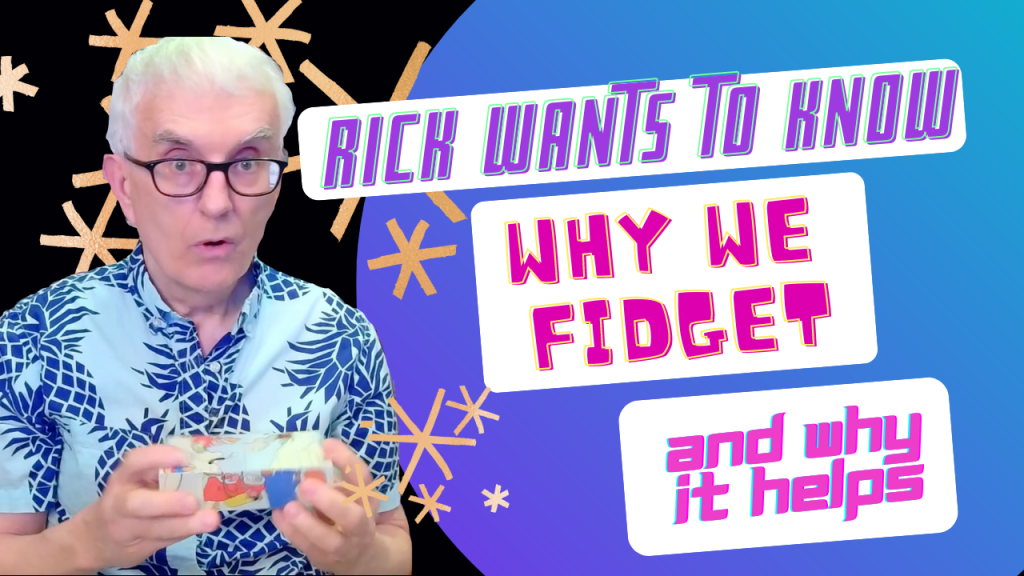 Is this you? Tapping your fingers. Bouncing a leg. Fiddling with a pencil, pen, keys, rings, bracelets, cutlery, dreadlocks, rubber baands…

Until someone yells, “Stop that! Don’t you know how annoying that is?” Actually, you probably had no idea we were even doing it. Embarrassed, you stop. For a minute or two. And then, tap-tap-tap…

Why do we fidget? Is it something to worry about? A problem? Or could it be helpful?!

While other folks may find your fidgeting distracting, it may actually help you to manage agitation and improve your ability to focus and think.

What is fidgeting? Why do we do it? Is it good for us, is it bad, or is it a case of depends? Let’s find out.

Hi I’m Rick Green and I want to know if my fidgeting is actually helpful for me. I know it can be annoying for everyone else, well it used to be until I found better ways to burn off that restless agitating energy, better ways to fidget.

So first of all let’s define what we mean by fidgeting and then see why and when we do it, some of us more than others, obviously, and finally let’s discover if and how does fidgeting help us or hinder us, should we stop doing it or perhaps just find more adaptive ways to fidget.

First let’s define fidgeting, how about something physical, engaging in a peripheral perhaps relevant movement or fiddling with something while you’re engaged in a task. That’s my definition, it’s awkward but it’ll do.

We may fidget when we’re thinking, when we’re listening to someone, when we’re waiting for someone, waiting our turn, ruminating, fretting, whatever it is… we fidget.

Second. Why do so many of us fidget? It’s not like we want to, we don’t have a timer to remind us oh yes time to fidget. Oh is this bothering everyone? Mostly we’re unconscious that we’re doing it even if everyone else is noticing, we’re not really thinking about it because we’re busy thinking about whatever.

Wait, the same behavior when we’re swamped or when we’re bored seems contradictory. Let’s look at the two states of being overwhelmed or underwhelmed, we’ll start with feeling overwhelmed, fidgeting, you know this one when the pressure’s on you’re being taken to task, maybe being cross-examined by a lawyer or by your boss or by one of your kids, you’re waiting to go up on stage but the introduction is taking forever, I want to get up there, this could just be me.

So we take our agitation and we express it physically, we fidget because we need to, or we don’t fidget because now we are grown-ups and we know, and we have been told many times it’s rude, it’s distracting to tap your feet, or your fingers, or the knuckle cracking, or spinning the pen in our hand, twiddling our thumbs, twirling our hair. So we don’t fidget but we sure want to.

Now let’s look at the bored fidgeting. The reason we do this seems to be the opposite, because we don’t have enough energy and we want to keep the brain awake and focused on what’s happening, or what’s about to happen, and so we’ve got something that kind of occupies us so we can follow along, stuck in a meeting, or stuck in a classroom.

You know I was and still am a proud fidgeter. I spent most of my school years with a pen, pencil, eraser, coin, whatever, in my hand, of course carefully hidden from teachers view by holding it under the desk or usually by sitting behind a big kid and I was kind of tiny so most of the girls were bigger than me. As well I didn’t have friends I had human shields which is also handy for vanishing when the teacher asks who can tell me….

Now there are fidget toys and some great ones the fidget spinners are one, they were actually invented by a chemical engineer named Catherine Hettinger back in late 1993 but there was really no interest in the toy companies, the patent ran out and other people started coming up with different ideas and different you know stress balls.

Then in 2017 the fidget spinner market exploded and then they were given to the kids in the class who were the most restless, right, on the spectrum, and they were cool to have, how come he gets one, and soon everybody wanted one and soon everybody has one and then the noise was distracting because it helped the kid who was distracted but it distracted the kids who didn’t need the distraction and the school started to ban them. I wish they’d ban calculus while they’re at it, I know how to do differential equations thank you second year university, and I never use it, sorry I’m a little agitated.

When we’re in that underwhelmed bored mode we’re not speaking to you we’re looking right at you, apparently we’re paying attention and listening but we’re not registering anything, we’re agitated, we’re lost in thought, we’re fidgeting our fingers are moving around it’s nothing personal our mind is elsewhere, it’s adrift or we’re just bored in fact sometimes I want to say to people if you want me to pay attention say something more interesting but I have very few friends as it is so I don’t say that.

Ironically if what you say is too interesting then I get engaged, my mind will wake up and start racing and I’ll have all these thoughts and these questions and what if we added that to it and then we could put wheels on it and it’ll go really and that could solve the energy crisis and and make us famous and we could make like hundreds of dollars.

Either way, overwhelmed or underwhelmed we find a physical distraction one that helps us to focus and retain what we’re hearing, whereas other people would find the opposite, that having to do two things makes them less focused, they find it annoying, they get distracted, and they’re… but, what, sorry, what?

One problem with fidgeting is that it can be unconscious in fact it’s usually unconscious for me, I can be rattling my keys that was how my dad watched tv standing there rattling his keys, when I do it when someone’s talking and I’m interested my wife finds it distracting and other people think oh I guess he wants to get in his car and go somewhere because we’re boring, you’re not boring it’s me.

The Solution to Fidgeting

Choose a good distraction preemptively, select a diversion that will help you and not set off other people, depending on the situation, be honest you’re going to be bored, you’re going to be worried, or anxious, or upset at times so plan ahead. You’re visiting relatives who get on your nerves, take something along just to play with. I don’t play golf but I like magic, I like making golf balls disappear.

The point is we can be distracted by what’s going on in our minds or what’s out there, we can tune out and here’s the surprise, the irony, the lesson.

Fidgeting can help with focus, doing something else can help us focus on the main thing, now to be clear this is different from getting distracted when you’re searching online for a specific image of a Christmas tree to paste into your annual Christmas newsletter and instead you find yourself somehow watching the third in a series of demolition derby championships in Georgia and two hours and 73 minutes have passed which is actually three hours and 13 minutes and now I’m googling that. Don’t ask me how I know this.

Fidgeting can help up to a point, if you have to sit still for a long period of time that’s when you want to get up stretch, take breaks, or if it’s a meeting suggest we take a break.

Fidgeting Without Being Noticed

So in conclusion I would say if you tend to fidget pick an activity that wakes up the brain just enough but doesn’t dominate, something that provides relief from the agitation, something that soaks up the excess energy or gives you a bit of excess energy, a small distraction to prevent you from going on to bigger distractions or even worse falling sound asleep.