Why Are People Judgmental? 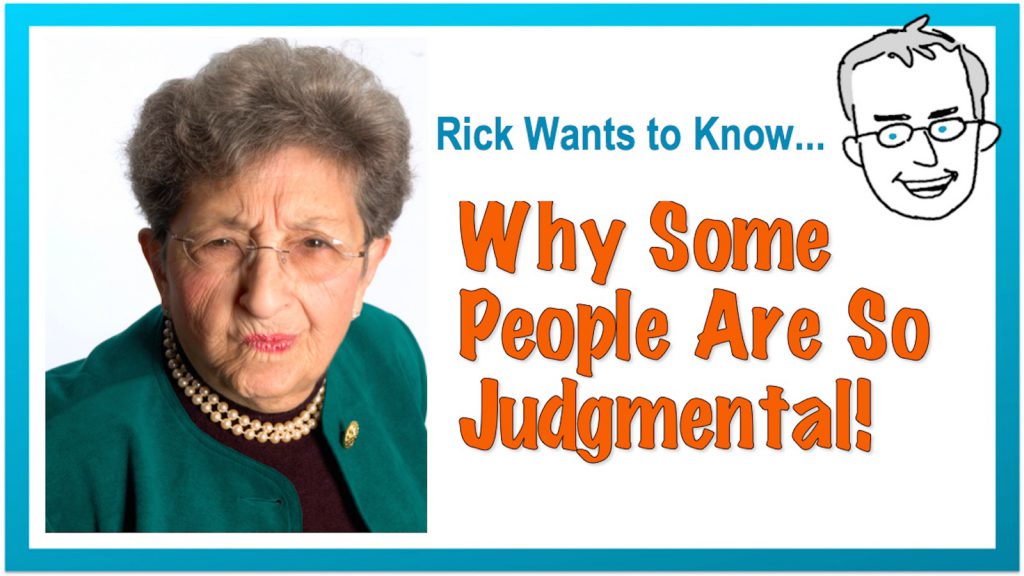 Hi I’m Rick Green and I want to know why some people are so judgmental, or unkind, or dismissive, for no apparent reason. What if when a person judges other people, shames them or puts them down they’re actually talking aboutt hemselves?

Why Are People Unkind?

When someone is self-righteous or intolerant they’re actually revealing their own insecurities and unresolved guilt about what they have done or failed to do.

So I’m going to tell a story and you can take away whatever the takeaway is that is most helpful for you. By the way the names have been changed to protect the innocent and also the guilty who pretended to be innocent.

All right let’s go back in time, it’s a sunny spring day and a young comedian named Rick uh Richard… okay not all the names have been changed. Rick has to drive one of his parents to a retirement home where one of his grandparents live,s it’s a visit and then he has to sit for an hour and demonstrate his acting skills by pretending to be interested in the conversation.

So that’s the scene, there are three generations in the room that’s the cast, the youngest is a a handsome chap in his 20’s, the parent aged… and I won’t say if it’s father or mother but she’d been in her 50’s I guess, and the grandparent in their 80’s.

Then the grandparent said “oh but it is” and they all laughed, okay well me and my mom laugh and the grandparent laughs along too, eventually, having no idea what’s so funny, you know that where you just laugh along, the irony is apparently lost or deliberately ignored and then Mom says “these things happen in every family, it’s like with Betty.” Betty. Click. Instant mood change, the elderly grandparent asks oh and how is Michael doing at his new company now?

I don’t notice the abrupt switch because when it comes to small talk and gossip I’d rather watch paint dry because at least I know at some point it’s gonna stop drying. An hour later which seemed like nine hours I’m driving Mom home and she ventures “I guess you’re wondering who Betty is” I’m not wondering in fact it takes me awhile just to figure out who is Betty? I mean Betty might have been someone I just ran over and didn’t notice.

To stall for time I say “yeah.” So Mom tells me about Betty, “well when your grandparent was in their teens they had a child out of wedlock named Betty.” Okay it wasn’t actually Betty but that was changed to protect the innocent because Betty was the innocent. This happened on a way, way back probably during World War One as best as I can figure out back in the old country of East Borgestagna.

Like I said some of the names were changed to protect the innocent, I mean a whole nation of… anyway, I’m surprised, shocked and alarmed because I’m so naive and so sheltered to learn that dear Betty the unplanned pregnancy, the scandalous product of sin, the shameful spawn of unconsecrated love was abandoned. Basically by my grandparent to be raised by some spinster aunts or something.

Wow I’m turning into an adult, I’m learning stuff like this about my family. Sadly I don’t know if Betty ever knew who her real parents were, by the time my grandparent left England I mean East Borgestagna and went across the Atlantic to… West Borgestagna eventually she… he… she one of the… whatever the parent is, Mary, I give it away, married and had children in wedlock which eventually led to my parents and my brothers and our kids and their kids.

Now i’m not judging the unplanned pregnancy and I’m not judging what was done. Back then illegitimate children were sloughed off all the time with relatives or put up for adoption and I know this because I watched Downton Abbey and it’s not just way back when so it happened, it still happens and people deal with it or they never deal with it and they carry the guilt within them for decades, for the rest of their life because they didn’t deal with it, and the guilt evolves into regret and it festers and it erupts now and then but turned outward, judgment, dismissal, prejudice, and holier than thou sanctity, false sanctity.

Larry seems so upset, no wonder every time you see him you bring up the fact that he is adopted. It’s nothing to be ashamed of he knows it’s nothing to be ashamed of. Oh but it is now. This isn’t just a quirk of a single grandparent or a whole generation it’s human nature, it’s what we all do, we turn it outwards or rather it’s one of the things that we do that doesn’t serve us well, but that was telling for me that moment, that was really a transformative moment. I don’t remember a lot but I remember that and here’s why, neither my Mom nor I had brought up adoption or Betty or how Larry was feeling. None of that was on our mind, in my case it couldn’t have been on my mind because I didn’t know about Betty, but somebody in that room knew, it was on somebody’s back burner burning away and they suddenly threw it out into the conversation.

So the lesson, the takeaway, what does Rick want you to know? Well I’ll let you take from the story whatever helps you, whatever makes a difference for you. For me it was a lesson that when someone is narrow-minded, angry, judgmental, or righteous, or gossipy, it’s not about me or you or anyone else, it’s their own stuff. In fact it’s incredibly revealing.

So every time someone rants and raves high and mighty full of piss and vinegar about the sin and the laziness, the greed of young kids today or those people like I’m doing now with my grand, with my… okay what .. well you know I’m not, I’m not high and mighty I’m better than that. It’s just it’s a story it probably didn’t even happen. What do you know, were you there?

I hope you’re happy now, and if you’re happy thank you for watching and commenting, especially becoming a patron to support these videos.