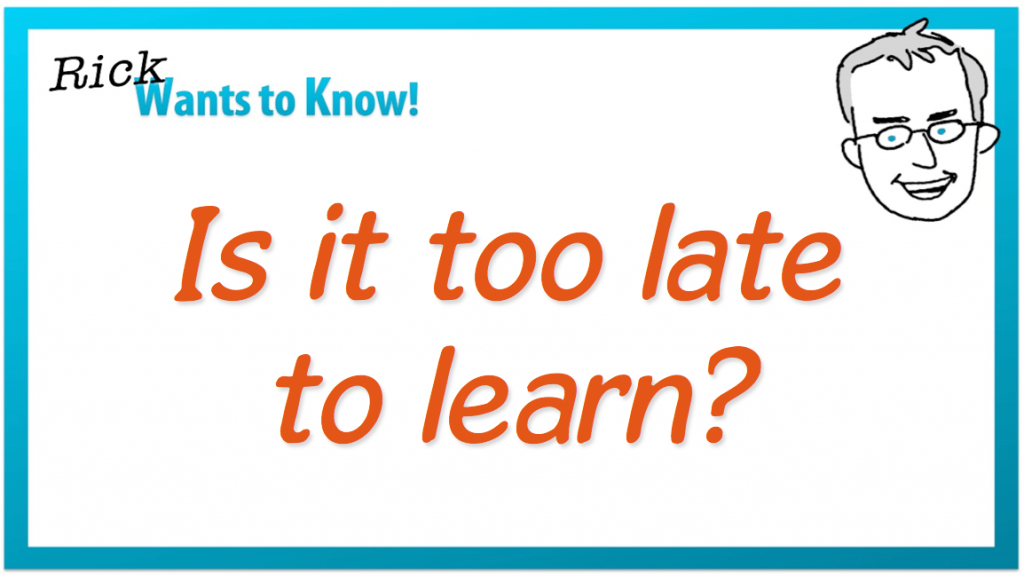 It is never too old to learn something new

Hi I’m Rick Green and I want to know how do I keep my brain young? How do I keep a good solid memory and also I want to slow the aging process of the brain, perhaps even reverse it, is that possible? I believe it’s never too late to learn something new but can I prove it?

This is actually something I’ve been working on and interested in since I was 20, trying to stay sharp and keep my brain fit. Clearly it’s too late for my body but if I can keep my mind young and alert and attentive I’ll really be able to figure out how and why my body went kablooey.

I’m joking I’m actually in better physical shape now than I was 20 years ago which is kind of pathetic. When I was young scientists or as they were known back then ‘alchemist wizards’ used to believe that the human brain grew throughout childhood, developed into your teens, and then at about 25 years of age things kind of locked in place and that was that, you had what you had and you made the most of it before it inevitably, naturally got to the point where you were yelling at kids to get off the lawn not realizing you’re in a home and the lawn is actually just green wallpaper.

At a certain point sure you could learn some new facts, hone a childhood skill but basically the house was built and the best you could do was some preventative upkeep you know, to prevent it from falling into disrepair too quickly. By the time you hit 60 your house would be falling apart faster than Dorothy’s farmhouse in the Wizard of OZ.

So at the time this idea that a 50, 60, or even 70 year old brain could grow and create new neural networks and rewire itself was scorned upon especially if you talk to a lot of old people. Scientists who suggested that a middle-aged brain could improve,, grow, develop and learn were called witches and burned at the stake. I may be misremembering this, I should have started this process sooner when I still had the full factulties.

Eventually somebody asked a question, a profound question which went something like this ‘well gee my Aunt Helen never golfed in her life but she started when she was 55 and now she’s beating the pants off of my Uncle Jack, what’s up with that? The short answer Uncle Jack needs a belt for those pants.

Learning After A Stroke

Then came personal examples the most famous and perhaps the most dramatic being Dr Jill Bolte-Taylor a brain scientist who had a severe stroke causing her to lose all her language, her logic and her mobility and yet she managed to relearn all those skills and gain back all that knowledge that she had lost everything from walking to being a brain doctor.

What happened is amazing, half her brain was damaged and so the other half of the brain commandeered and rewired itself to kind of pick up the slack. Her book My Stroke of Insight is an amazing read. Rewiring Dr Bolte-Taylor’s brain took eight years, massive rewiring takes time I mean how long did it take you to learn to walk and talk and ride a bike the first time around and that was when you were young and your brain was really into growing, learning, it was in learning mode at full throttle. If you’ve ever had a toddler asking you question after question after question you know what I’m talking about.

Scientists now know that the human brain continues to grow and create new neuralpathways for as long as you continue learning new things and trying to develop new skills. A polish neurologist named Jerzy Konorski termed it Neuroplasticity. There’s an incredible flexibility in our brains, a lot of work is being done around the brain’s ability to heal or simply transform and grow. Check out The Brain That Changes Itself another good book, it’s just one of many books on brain plasticity and how you can use it to your advantage, because this isn’t just about repairing the damage from a stroke or bypassing it it’s also about building new connections.

So it’s possible to have a stroke and damage one part of the brain and another part of the brain can be rewired, trained from scratch to take over. Perhaps it’s not so surprising now that we have PET scans of brains as they’re actually thinking and working and trying to do things. They have shown that lots of areas of the brain light up when you’re doing certain tasks and a particular task is not restricted to one part of the brain it’s this complex choreography not a series of solos, it’s a dance. So it looks like the left brain right brain theory the one that suggests that this side handles the logic and this side handles the creativity and imagination that’s actually a somewhat passe model of how the brain works, both sides light up when we’re doing things, to different degrees of course.

Of course even without a stroke on a day-to-day level our brain can create new pathways which is how you remember what you had for breakfast. New neuralpathways can eventually become habits with repetition or we follow old habits and those pathways get stronger.

How Can I Build New Pathways?

So how can you build new pathways, learn new skills, build new mental muscles? Well you build muscles by exercise, by repetition by doing reps. Same with the brain, it’s a slow process but your body creates about 330 billion new cells every day, okay mostly blood cells and gut cells but some brain cells as well, we are dynamic, we are always changing.

So knowing that learning a new skill will strengthen my brain I wentout and I bought one of these, what is it? It’s a juggling toy called a Diablo a kind of mutant yo-yo that allows you to do all kinds of tricks, but as I found out not at first. Like anything that’s challenging, getting in shape, mastering a game, learning magic, being happy, it takes practice but gradually over time even at my age. After a while I gotta say I got pretty good and then I got busy with work and we moved and stuff happened and the Diablo sat in a drawer by the front door because I knew next week I’m gonna start practicing again.

Then as it turned out last winter I was searching for gloves and I found the Diablo and I started again practicing, practice makes perfect right? No. It makes you better incrementally, painfully incrementally sometimes and sometimes practice could make you worse. What?! Well suppose you’ve decided to become an olympic class kayaker or you just want to be good enough to avoid drowning when you go out in your kayak. Great, so you start practicing but if the paddle you’ve got is too small and made of very light yellow cardboard or if you’re kayaking coach tells you to hold it in your teeth and then rock your head side to side? Yeah all the practice in the world’s not going to help, in fact it’ll make things worse because you’ll probably break your neck. I’ll talk more about this in another video.

For now let’s all just bask in the good news that the brain can learn at any age, whether you’re 17 or 70 or 183 like me. You can learn something new, it could be a game, a sport, a second language, a new musical instrument, heck even a new profession, or as Dr Bolte-Taylor’s case relearning an old profession. Wow! Your brain is capable you just got to do what it takes which is the practice, and as long as you dedicate time and have the right equipment and good instructions on what to do and not to do, like don’t Diablo indoors.

Thanks for watching I’m Rick Green and I want to know what you want to know. Consider becoming a Patron supporter in which case you’ll get into the chat rooms, you’ll enjoy exclusive webinars and you can even have a say in what the new videos are about.