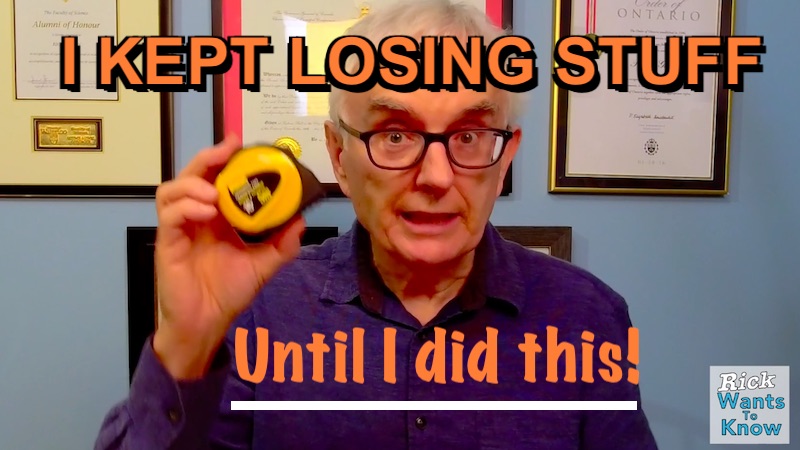 One common challenge our Patrons (share about in the chat rooms can be captured in the frustrated wail, ‘Where is it?! I had it in my hand 30 seconds ago!!!’

For me, it was always misplacing my tape measure. Eventually I’ve found a solution, or should I say over the years I accumulated a solution.

The turning point came when I realized that if I keep misplacing a THING, the solution is not to ‘pay attention,’ or ‘pause and think,’ or ‘be mindful,’ (None of which come easily to me) the solution is to have more than one of those THINGS.

This doesn’t apply to everything. I have one table saw. But for small, easily misplaced things I use a LOT, this works for me.

What to Do About Losing Things

A number of our Patreon supporters have asked what to do about losing things, they put down the tape measure, or the scissors, or a pen or a note, or their wallet, or keys, or phone, and they go to pick it up again and it’s gone. We keep losing what it is we’re holding on to. where did I put it?

Close Your Eyes and Think About it

Now one solution that one of our members mentioned is that she sat down after working herself into a frenzy, she sat down and just closed her eyes for 10 seconds and suddenly remembered where it was, so that’s one thing, think back, what was I doing, that actually works.

Common Item? Have More Than One

Another trick that I like to use is if I’m going to lose something a lot I’ll have more than one of them. Let me give you an example I love from one of the many books that I’ve read. The book talked about a woman who was always losing her keys and it was driving her crazy, she was embarrassed about it, and on her birthday her husband gave her seven sets of keys.

That my friends is love because love if you think about it is really accepting, accepting what is and just loving what is, and he obviously loved her and he got her seven sets of keys, how cool is that, of course when she opened and saw them she burst into tears because she realized he got her he wasn’t nagging her, he wasn’t telling her to change, he went yeah this is a challenge for you here’s what we’re gonna do about it, and sometimes our challenges are not physical challenges, we don’t need a wheelchair ramp we just need strategies to help us overcome the little quirks that our minds are prone to, and to be honest pretty well everybody’s mind is prone to forgetting where they put something.

For me the item I kept losing was a tape measure, whenever I was working on a project around the house or in the yard I would set down the tape measure and then I couldn’t find it, or I’d be working in the workshop, tape measure, I put it down and it’s gone.

So what did I do? I got it a second tape measure in fact I went one better and I got three of them, now there’s actually four because my wife has one in her toolbox but I’m not allowed to open that toolbox because she swears that I keep taking things from it, I don’t but there you are, so there’s four now.

That’s not enough for me because I might be working on my model railroad down in the basement, I’ll need one there. I might be doing some renovations around the house. The house we bought needs a lot of renovations, so I’ll need at least a couple, one in the railroad, a couple around where I’m doing renovations, and then I’m working out in the garage so I need one out there. Actually you know what I need out there I need two, so at least two out there and these ones, this one I’ve had a long long time, in fact it’s broken, that’s okay it still kind of works.

These ones I’ve had for a long time, this one was probably a yard sale or might have been that it came from the family cottage. When we sold the family cottage through all these tools that were there, that my brother the contractor had been using and he didn’t need them because he already had better tools, so I probably got that from there.

This one I’m sure is just a dollar store pickup, now this one I really like, what are we up to now one, two, three, four, five, six, number six… bright yellow. I’m going to talk about the color in another video but this one is a Workforce, so it’s a dollar store one, so it’s probably you know, five, six, seven bucks, but man the aggravation it saves.

Here’s another one I think this might be another one from the cottage, it’s got tape on it, but here’s another one, so now I’ve got one case… five, six, seven, eight, and this one was given to me by Simon when we wrapped up History Bites the TV series I worked on, and it’s a tape measure, it’s a tiny little thing but it’s great, handy to carry around if you’re going shopping, clothes shopping, whatever uh Furniture shopping, you can measure things and because my wife Ava also worked on the show he gave one to Ava, so I have two of these little ones.

So we’re now up to 10 and here’s an 11th one, and then for Christmas this year knowing all that we were going through here my son gave me this, maybe it was my daughter, hope they don’t watch this, they don’t watch anything I do.

So this is a laser measurer and I can push this here and aim it across the room, there we go, now there’s no danger you know what happens with these tape measures especially these big ones when they you’ve got it like stretched out for 20 feet and then you let her go all right let the end go like that’s that you can lose a finger that way. I’ve done it twice, so anyway laser measuring was fabulous you just point it and let’s see how far to the roof, 66 and 7/8 inches, wow if I ever build something that hangs out I’ll know.

Anyway, so my point is have more of them, one thing, I think I own six or seven hammers, I just collect them now and then great place yard sales, or uh Christmas bazaars sometimes there’s some amazing finds, less and less these days uh because people now realize things are worth money and everyone’s trying to make a buck online and selling it on the marketplace and places like that but that said I go back to my original point, I have more than one of every tool I own except the radial arm saw and a few other things, but basically that’s my solution to losing things, have more than one of them.