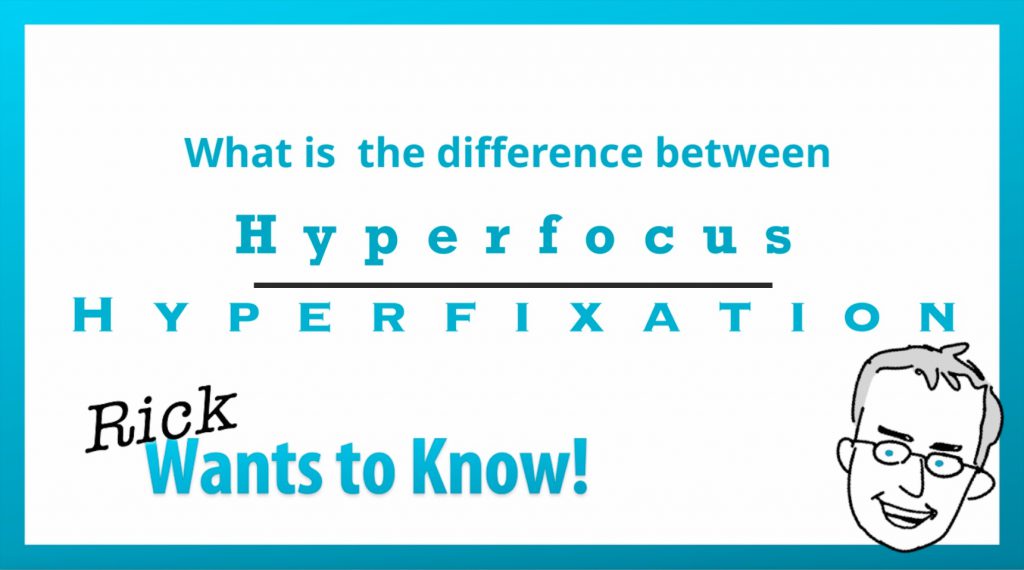 Hyperfocus? Hyperfixation? What’s the difference? What do they mean? And are they strengths? Or a weakness? Can they be useful? Rick talks about his own experience with hyperfocus at work and play, getting in the zone, locked in on what he’s doing. He also demonstrates his own personal hyperfixation of 50 years.

HYPERFOCUS vs HYPERFIXATION
WHAT’S THE DIFFERENCE?

Good question!  I found a variety of definitions.  So it is confusing.  Some claiming it’s the same thing with different names.

So, here’s my take.  This is the difference according to the Ricktionary… This may or may not add to the confusion.

First Hyperfocus, which I know well.  I start something and hours pass, and I am oblivious until my stomach says, “I’m empty!”  Or my bladder shouts, “I’m full.”  Paradoxically, paradollicos paradoxical… Oddly enough, when I’m not in a state of Hyperfocus I can be quite the opposite: mind wandering, easily distracted, zoned out, tuned out.  And yes, I may look like I’m listening,… I’m lost in thought.  Or thoughts.   Mind racing.  Hop skip and jump.  Here, There and Everywhere… (MORE THOUGHTS).

And yet, as I say, sometimes I can be Hyperfocused. This is important because people will dismiss a child, or adult who is distracted, “You can focus just fine when you want to,”   They’re right.  Kinda.  Sort of.  Often mostly. Yes…I can focus, even Hyper-Focus on something that interests me… Even when there is a slew of urgent stuff I need to get to.  Stuff I may actually want to get to.  Or, have to do.

I’m a bit like Goldilocks,  although I wouldn’t casually breaking into bear’s dens, without knocking.  But I get her quest to find the chair that’s not to hard, not too soft, the porridge that’s just right, and then needing a nap, but unable to rest unless the bed is just right.

My attention can be too little… Or way too much… Or, once in a while, just right.  Then I’m in the zone.   But sometimes I’m hyperfocused whether I want it to be or not.  Unlike Goldilocks I can’t just switch to the next bowl…  it’s one more, then another… and another, and one more.   Then hyperfocus isn’t a quirk or a strength, it’s a weakness, exploited by social media, and interfering with my life.

In other videos on procrastination we’ve looked at how anyone can struggle to get started, to focus on what needs doing… and yet,  with other tasks, starting is not problem.  We can slip into hyperfocus very quickly.

Think of someone practicing a sport they love, a musical instrument, playing a video game, drawing, even for some people, paperwork or planning… Their minds are engaged.

For me, it happens when I’m onstage in front of a crowd….or alone, building a miniature world.  I’m lost to the world hyperfocused whether I’m building for myself or for others.  I spent hours focused on building models for a local railway museum, but kept forgetting to keep track of my hours so I could invoice for my time.

Or, I might start writing a television script and get locked in, for hours and hours… Which is great.  If it’s the script that I’m supposed to be working on.

Hyperfocus can be useful… when I’m doing the right thing.  Unfortunately, I easily latch onto something trivial, irrelevant, but interesting to me, and never attend to what is urgent, important, but for some reason doesn’t interest my brain.  It’s a challenge to become interested in something that doesn’t interest you.  Would you like me to talk about Model Railroading for 3 hours?   See.

It’s difficult to “choose to be interested,” about something.  Why?  What’s going on?  On a neurochemical level, a task or idea doesn’t trigger the Dopamine, Norepinephrine, these neurotransmitters that give us get up and go!  And it’s ongoing. The more we do something, the more the neural pathways grow and strengthen and link to other neurons.

As a kid I always worked on my model railroad rather than homework. I could hyperfocus on trains for hours.  Days.  Of course, that was then, I was just a child.  Today, when it’s time to do boring tasks like paperwork, I go and work on my model railroad.  Which is an example of the difference between Hyperfocus and Hyperfixation.

When I start working on a project, before long I’m engaged, entranced, locked in, careful.. steady. I’m hyperfocused. Whereas Hyper-Fixation looks more like this…

SHOTS OF THE MODEL RAILROAD

50 years.  Still drawn to it.  Still fascinated by it.  There are other, less obscure examples. About to make a tough golf shot?  Hyperfocused. Playing golf every day, two or three times a day?  That’s Hyper-fixated.

Hyperfocus is moment by moment.  Hyperfixation can last for years. Playing poker?  Hyperfocused on the hand  you have. Playing poker every day for hours? Hyperfixated.  Starting to border on addiction. Losing your savings.  Losing your family.  The fixation overrides the thinking, an addiction,  an endless desire that is never satiated for very long.

To be clear object of the fixation can be anything.  I don’t get poker.  Too much chance involved.   But I know 98% of the population think… Model Trains?  Gawwwd, shoot me now!

My hyperfocus evaporates when I finish painting the model.  Fading quickly, like a dimmer switch.  Whereas the fascination, the fixation?  It’s always there, in the background.  Trains!  This is more just a few hours enthralled in a task, lost in thought, and then needing a break.  This is something I return to again and again.  A passion.  And yes, the interest waxes and wanes over the years, but it’s always there.

And here’s the funny thing about fixation.  It can suddenly vanish… Sometimes, right when the end is in sight. The student who, after years, finally finishes their thesis, then can’t be bothered to hand it in and never gets their diploma.  The bride, who, after planning the perfect wedding, is walking down the aisle, realizes, he isn’t the one.  What she loved  It was the thrill of the chase. Planning the wedding.  The dress.  The flowers.

I recall a model railroad store owner who collected Lionel trains.  It took years.  He was always on the hunt.  Not easy before E-Bay and the internet.  And then, once he had one of every single product Lionel had ever put out… the rush was over.  And he sold it all.  As if the spell was broken.  Or the hunt was over.

Stuck In a Mental Loop

One final thought, hyperfixation isn’t just about hobbies or careers.  Everyone can obsess on negatives, on painful wrongs, childhood hurts, perceived injustices. We become stuck, rehashing and replaying a romantic breakup, losing a job, being bullied, or, more dramatic traumas, a death of a loved on, combat, a in a natural disaster.

It’s easy to become fixated on negative events that triggered our emotions, that play into our self-doubts or fears or need to feel safe, or loved.  Which leads to Country Music songs.

But Hyper-Fixation can be a positive.  It’s what’s is required to create a company like Apple Computers.  Or dedicate your life trying to save an endangered species.  Or do something for the betterment of mankind like… model railroading.

Let’s sum this up, hyperfocus is moment by moment. Hyperfixation is ongoing, perhaps for a lifetime,be it gardening, Star Wars, collecting typewriters.

Both are tricky.  Hyper-Focus can make me very productive or it can steal hours of my life, playing Sudoku for hours.

We may grow hyperfixated on something we love, or something traumatic: a deep loss, or even a casual remark someone made that we ruminate over, endlessly.

So hyperfocus, a temporary state that you can fall in and out of…

Hyperfixation is about an activity, topic, or event (good or bad) that we return to again and again.

And yes, someone may suddenly snap out of hyperfixation, realizing they don’t want to spend five more years obsessing over a divorce, grieving a financial setback, complaining about a parent.  An epiphany that sets them free.

Or they may lament, “Why did I spend all that time playing video games?  When I could have been…. model railroading.