How to Stop Losing Things 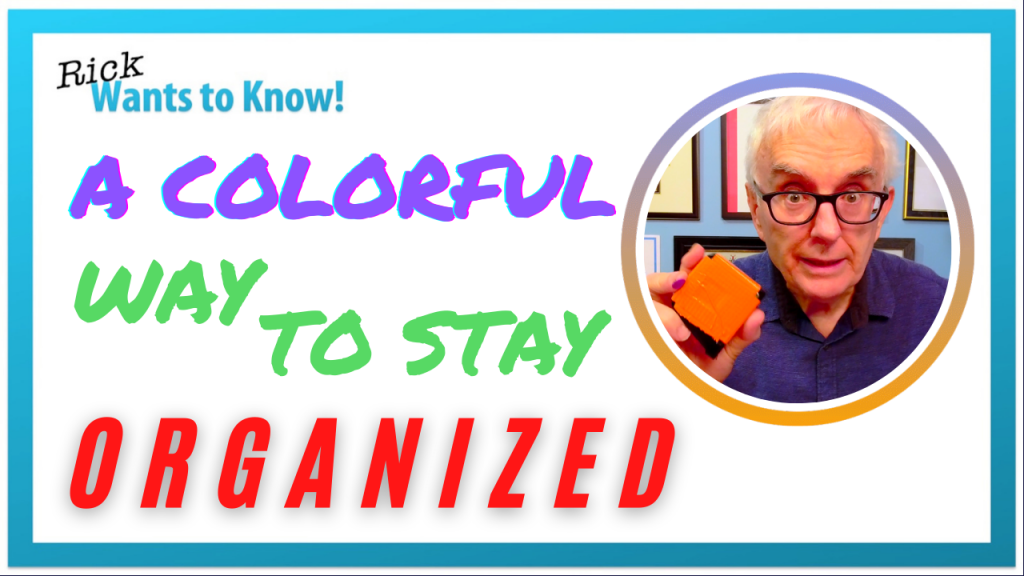 Here’s a simple strategy I’ve been using for decades. It’s visual. Dramatic. And reduces the number of times I wail, ‘Where is it? I had it in my hand a minute ago!’

Hi I’m Rick Green and I want to talk about a tip that I discovered is very helpful for not only finding things that I keep misplacing and then can’t seem to find, but also in organizing things that I do want to find.

Bright Color Is Easier To See

To start with I’ll ask you a question, which is easier to spot the top of the glove or the bottom of the glove?

If you said the bottom you need to check your computer monitor or your phone level, anyway yep why because it’s bright, it’s borderline fluorescent, it’s not quite day glow but it is a bright color.

Black is, black is basically like night there’s no light at all, so nothing’s coming off of that, so it makes it very hard to see, the top part has lots of light coming off.

Have More Than One

In a previous video (I Keep Losing Things) I talked about the problem of putting something down, a pen, a pencil, your phone, keys, a tape measure and then going to reach for it and you can’t find it, and my solution of course was to have more than one of those, multiple sets of car keys, um wallets… probably just one, but I have a lot of tape measures and I can always find one when I need it.

Here’s the problem, this is a Lufkin 4 meter 13 foot tape measure and this is the exact same tape measure with color. I applied the color, I don’t feel bad about doing that, I own this, I’m allowed to do that.

I got the idea from a show called The Red Green Show, duct tape, duct tape comes in many colors, duct tape comes in all kinds of fluorescent colors and that’s awesome because you can then wrap your tools in it, in fact what I’ve done is I’ve taken all my wife’s garden tools and I’ve wrapped them, somewhere on the handle or on the shaft some orange tape, that way if you set it down in the grass it stands out, bright orange so use color.

Different Ways to Use Color

I’m sure you have heard if you want to stay organized use color for different things. I stumbled upon this about I don’t know 40 years ago when I was with the Frantics comedy troupe and what we did was we had all of our scripts in file folders, if it was a script for radio it was in yellow folder, if it was for television it was in the red folder, if it was a song it was in the pink folder, the brown folder was for live on stage, green this was for specific projects, and then blue was for anything that might go into a book or into our funny newsletter that we used to hand out at our tapings that are radio taping.

Color really worked because we had the same colored cards and when we were laying out a radio show we wanted to end on a song so there’d always be a pink card, and then the longer skits were yellow, and so on, so you could see well we need a short black out here and we can put another song here, so that really helped us not only organize where the scripts were and find them when you were going through filing cabinets looking for a script, but it also meant that we could organize our entire show that way.

Use color, like I say in the garden where everything’s either green or brown I use orange, you might also use yellow because that’s what they use on those crime scene tapes and all kinds of stuff, it’s bright it sticks out, yield, you name it. So yellow works great but see here’s the thing and you turn it sideways kind of disappears because the top is black, so you know it’s yours you own it you can do whatever you want with it.

The people I know who have a learning disability like dyslexia love color, it helps narrow things down, and then they can go looking through while reading to find what they want, color, color.

Use DayGlo to Your Advantage

One final thing Day Glo, Day Glo actually is brighter than anything else around even in sunlight. The way it works is day glow absorbs the ultraviolet light, like when the sun shining there’s infrared which is the heat and then there’s the visible light which we can see you know from red all the way up to uh purple or whatever it’s called, and then violet, you saw and then beyond that beyond violet there’s the ultra violet, and it absorbs the ultraviolet and releases it as visible light.

So not only are you getting the bounce from the visible orange but with Day Glo orange you’re actually getting even brighter because it’s absorbing the ultraviolet and emitting it, it’s kind of like a dog can hear certain sounds because they’re high up and we can’t. It’s the same with the wavelength, and uh sorry I used to teach at a science center.

So the three takeaways are color, color, and color.

Thanks for watching I’m Rick Green do like subscribe, comment and maybe drop by the house and drop off cake ,chocolate cake, I know it’s brown, it’s not very bright, but you can put some colored sprinkles on it.. I could go from that.