Do I Have a Hoarding Disorder? 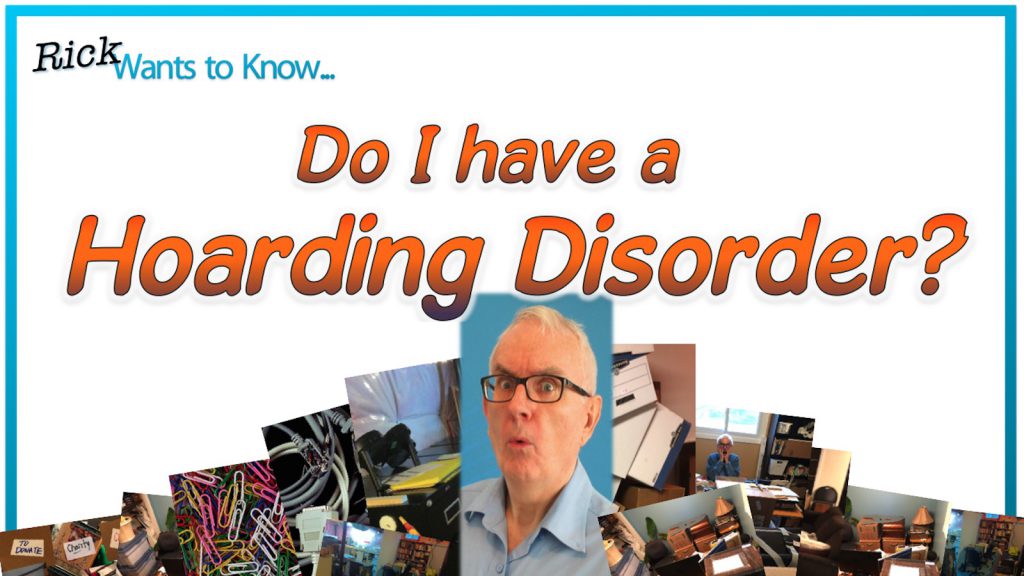 Do I have a hoarding disorder? I have closets crammed full of stuff. Stacks of 5 or 6 boxes. Every surface piled with more stuff!

Moving to a much smaller house has created a crisis of clutter for us. Not just personal stuff. Hundreds of video tapes and scripts from television series. Paperwork. Memorabilia We’re living in a rummage sale!

Before sorting through a box to decide what to keep, I have to clear a flat surface. But where do I put that stuff? Then I need find a place for the ‘keepers.’

It’s been confronting. Emotional. And difficult. And I’m starting to wonder do I have a Hoarding Disorder?!

Support Rick Green on Patreon and take part in 2 live webinars every month!

Books Mentioned in This Video (available on Amazon)

The Life Changing Magic of Tidying Up

Spark Joy: An Illustrated Master Class on The Art of Organizing and Tidying Up

Tidying Up with Marie Kondo

Am I a Hoarder?

Hello I’m Rick Green and I want to know am I a hoarder? And if so, if I am how do I stop hoarding and actually get rid of stuff? How do I declutter?

This is not an academic question, having moved this year we are still sorting through and emptying one box of stuff after another, it is stunning and kind of overwhelming how much we have accumulated, and it’s sobering to realize how much of it we actually need to function.

I know we’re not the only ones because everyone who has visited to help out or just drop by has looked around and confessed “yeah i’m dreading if we ever have to move”.

This is a complicated and emotional topic so I’m going to draw upon some technology to help emphasize and clarify my message.

Our previous home was a huge house that we were renting, it was great, it held all of our personal stuff as well as as much or more business stuff, offices and edit suites, the basement was set up for a shooting, a studio space, there were 16 filing cabinet drawers overflowing with 40 years of scripts, a dozen bankers boxes of contracts and production paperwork, and notes and videotapes, boxes and boxes with hundreds and hundreds, I think there were 500 camera tapes, VHS copies of everything and then the final cut, and then the final cut copy with the subtitles, and then the final cut copy with the subtitles that sent to the broadcaster, cds with animation and graphics and titles, two bankers boxes full of floppy disks, remember these, yeah full of animation and graphics and titles and pictures for the show and of course all the logging information from the 600 camera tapes. Binders of edit notes, it was (SCREAM).

So that big house was well stuffed, but as the years passed the editor started working from home, Dwayne who hosts our website lives three hours away, David who handles all the day-to-day stuff everything from the Friday Funnies to making sure things are running is over an hour away, Manuel the moderator of our patron chat room lives in Germany, so how come the house keeps filling up with stuff?

Almost all of our furniture is inherited from my parents, from my family’s cottage that they sold, from my wife’s family’s farm, yard sale stuff, charity shop finds, stuff our siblings or friends didn’t want, we’ll take it we’re recycling!

But still the amount of stuff we had, you know these, we had nine for two of us, of course me I looked at them and I thought oh I know I could do a puppet show with these glue little eyes onto them, make a little body, yes it’s the slither and rattler show.

Which explains for example the box of old door hardware in the garage, I’m gonna create an art piece out of door hardware… hopefully. I could turn this old plank into eight cheese boards, listen I cut the cheese a lot but eight?

And there were so many things that got kept because they were neat, and then there’s another phrase that leads to all kinds of accumulation, oh look at that… I like it, but do i love it? Does it spark joy? That’s the second book by Marie Kondo whose first book became a number one New York Times best seller, 3 million copies sold and this is an old copy so probably double that by now. The life-changing magic of tidying up, using her method in about an hour I pared down my wardrobe by half, Ava did the same, the local charity shop was delighted and so were we.

But what I love is that she actually comes from a very powerfully positive point of view creating a home full of things that you love, only things that spark joy. Spark joy as opposed to sparking guilt, or obligation, or shame, or well it was a gift from Aunt Helen, or we might need it someday, which is fear, scarcity.

So am I a hoarder? Maybe a bit, I’m definitely at the top end of the don’t throw that out I have an idea spectrum, but circumstances in our case a house that is less than half the size of the place that we were renting before has forced us to do some reassessing, it’s painful at first but as the space opens up it brings a sense of calm and fewer stubbed toes or bruised shins, and so the lesson for me has been not should we keep this or could we keep this but do we love this and do we need it. Letting go of stuff becomes easier and easier and easier, it’s amazing.