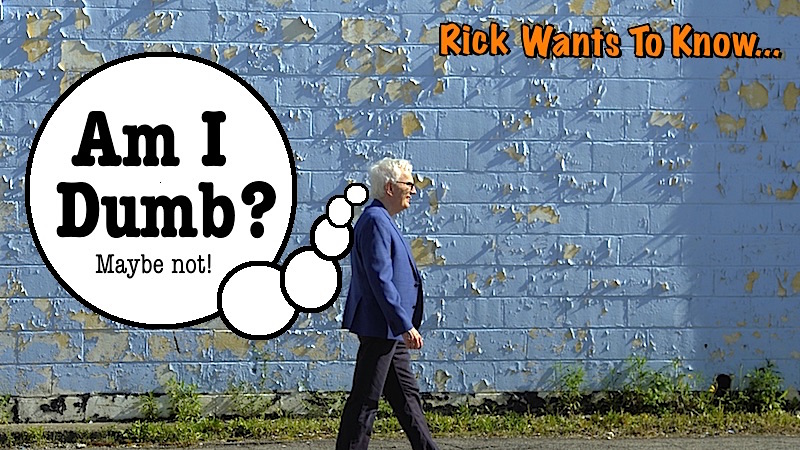 For a good part of my life I thought I was dumb. Actually, that was the bad part of my life. I struggled in school while my siblings earned honors. (Is that what they call it? I don’t remember.) Naturally I assumed the problem was with me. Now I realize, as do a lot of researchers and educators, that the stumbling block for many students and adults isn’t the amount of brainpower, but how your brain learns the best.

For example, when I purchase something with a long list of written instructions, I’m overwhelmed. Whereas minimal words and lots of illustrations and I’m good to go! (Thank you, Ikea!)

Support Rick on Patreon and take part in 2 webinars every month!

Hi I’m Rick Green and I want to know why I grew up like a lot of folks thinking I was dumb. Like a lot of folks, perhaps even you, I struggled in school and yet I learned more, learned faster, and retained more when I was left to my own devices with my toys, my interests, my books, outside of the classroom.

I didn’t think I was learning, I was just having fun, I was curious, I mean I was actually eager to find out about things, dinosaurs and time travel, and railroad trains, and girls, and sure enough I ended up being quite the expert on railroad trains in elementary school.

School Taught Me I Was Mediocre

I did learn one powerful lesson I’m slightly below mediocre, the proof was hammered home in all my report cards and it was consistent year after year, a thrice annual reaffirmation of my limitations. I mean sitting in a classroom with a million distractions was how everyone else was learning and a lot of them got A’s and B’s so clearly the problem was me. I mean come on at age eight I am not going to question the structure and methodology of the entire educational system, I ‘m not Greta Thunberg.

Even in high school I was only vaguely aware that my reading and audio comprehension was poor, but also I was aware that I really liked some subjects and I often thought well that’s because I like the teacher, maybe not.

Today I know I am a visual and a tactile or kinaesthetic learner, not audio obviously, who tends to tune out when someone speaks for more than 20 seconds. Back then teachers simply noted that I was easily distracted “Ricky is restless, Ricky fidgets he needs constant stimulation, would rather play with his toys at his desk” can you imagine? What kind of child would rather play with their toys at the desk? It’s just doomed! He’s doomed I tell you.

I now know I am an interest driven learner, still am, meaning bored by one topic yet obsessed over another, check out my video on hyper focus and hyper fixation I mean it’s a it’s a potential superpower but back then who knew.

At university interestingly enough I earned high marks in quantum mechanics and relativity, a fascinating but complex and often counter-intuitive subject that most other students were struggling to pass, whereas the basic courses, the basic ones that were no-brainers for most of the class like electricity and magnetism? I barely passed.

It was weird until I understood I was an interest driven learner which I suppose we all are to some extent.

The Challenge of Teaching

So if you’re a parent, teacher, you’re in sales, you’re married, a coach, or just trying to get someone engaged and excited about what you want to do, or you want them to do, or you want for them, you have to pique their interest. What matters to them? What turns their crank? and yes you still have to lay the foundation, set the stage and you know and teach the basics. Like you know in school the three R’s but you could even do that in a way they can understand quickly, explain the basics in a way they get it and then get to the good stuff.

I’m sorry if this is sounding a bit heady and kind of theoretical, it’s actually quite practical, it’s a powerful tool and here’s how I came to this realization. It was at my first job giving public demonstrations at the Ontario Science Centre, it was exciting stuff, it was great fun, cryogenics, printing, combustion, electricity everybody’s hair going up, but my specialty was the laser demo.

Now when I was being trained to do the show I was told, we start by explaining that laser is short for light amplification by the stimulated emission of radiation, light amplification by the stimulated… okay got it, sounds logical. Like a lot of things it sounds logical, it didn’t work in real life. Something I gradually realized by looking out at the confused uncomprehending expressions of the audience members that first line by line example and they knew okay this is going to be over my head, I will think about lunch.

Come on did they need to know what laser stood for? most of us don’t even know what wifi is short for. If you go in for laser eye surgery they don’t say to you we’ll be using light amplified by the stimulated emission of radiation, radiation well that sounds scary.

By the way radiation means something that radiates over, the infrared radiation from the coils in your toaster radiates out to toast your bagel, another technical term for infrared radiation is heat, we’ve all heard of that but there was actually a distinct lack of heat in my laser demonstrations. Until I got to the part about how lasers might help us, how you might actually use a laser.

Now back then most folks just associated laser, they thought of lasers uh as phasers lightsabers, death rays, what interested people was how it might be of interest to them, how it might impact their lives, not necessarily as a weapon from Star Wars, how would it affect their families, their work, their health?

When I talked about that you could hear a pin drop, so gradually by experimenting over hundreds perhaps even thousands of demonstrations I found a way to demolish what people had heard, explain what made lasers so special and then having covered those basics get to the good stuff.

Now I haven’t done this in decades but I’m going to do the demonstration, the first minute or two of the demonstration. I had a small laser turned on and I had a spray bottle full of water and when I spritzed it you could see the laser beam right in front of my face, this grabbed everybody. Here’s how it went.

My Laser Presentation Was Different

Welcome ladies and gentlemen to the laser show my name is Rick and I have a laser, a laser, wow!

This is light, the laser makes light, see the light bulbs in the ceiling they make light too the difference is the light in the ceiling goes all over the room even on to me and then into your eye. The laser goes in one direction, doesn’t spread out.

Another thing that’s not necessarily obvious is that the light from the lightbulb is all different colors, if you took a prism you could see the whole rainbow of colors that are there that add up to make white. This laser a helium neon laser produces light at exactly 6,328 angstrom units.

I haven’t done this in a while this is the purest color of red. What if you could find a color of light a specific wavelength that was absorbed by cancer cells and not healthy cells? We’ll talk about that more in a minute.

The final thing you should know and you’ll definitely not know this from looking at it is that the waves are in step with each other, they’re all like a marching band, this is like the arena or the stadium emptying at the end of the game, all different colored outfits all going in different directions at different times, out of step with each other, this is chaos, this is pure and straight, this is one pure color and with this kind of purity and precision we can perform miracles.

If these were sound waves that’s the loudest cacophony of noise, this is one tone. It was simple and people were surprised, hey I think I understood that and then we could delve into the possibilities eye surgery or laser scalpels that would cauterize and sterilize as it cuts measuring the distance to the moon to within inches or on a construction site dentistry industrial uses now.

Back then all of this was just potential uses, today they’re common, so doing my laser demonstration taught me two valuable lessons which actually might be one I don’t know.

First if you want to touch, move and inspire people get to the good stuff early and eliminate whatever they don’t actually need to hear, at least not yet. I mean when you’re selling someone a car or selling them on the idea that it’s worth 350 dollars to see Paul McCartney live start with Paul McCartney live, unless you’re trying to sell them the car then it’s confusing.

Second if you’re explaining something to someone and you want to sound pompous and leave them feeling stupid use a lot of technical jargon and irrelevant details that probably the person who invented the thing doesn’t even need to know anymore. However if you’re not interested in feeling superior and boring people use terms or examples or analogies they can relate to.

This is basic Dale Carnegie how to win friends and influence people stuff. Be relevant whether you’re teaching a course, you’re selling your services online or in person, whether you’re allaying the fears of an elderly person who needs eye surgery, what do they need to know, what matters to them. Otherwise they’ll be wondering as I often did back in school “Will this be on the exam? No? Okay lunch.”

Fries are pretty healthy, potatoes the potatoes are good, potato famine wasn’t that in history? or that last year is the potato famine going to be on the exam? Whether or not I’ll write an ancient room sorry yes continue sorry so am I dumb.

Are we as dumb as we think we are, maybe, maybe not, maybe we’re often taught in a way that just doesn’t work for us and when we are then when we’re interested, then when it addresses a concern we have then we can be laser focused.