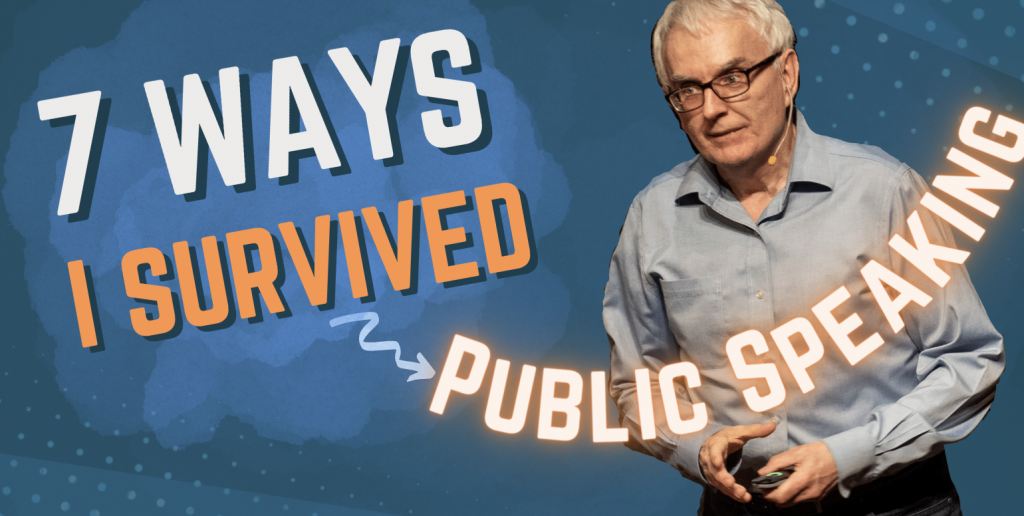 Nervous about public speaking? Do you suffer from stage fright? Terrified at the thought of addressing a large crowd, a small crowd, or even a small group of coworkers? You are not alone.

Now, I love being onstage, giving presentations and performing comedy for thousands of people. Here’s how I transformed what I once found terrifying into something delightful and exhilarating.

Have you ever seen a list of fears, sometimes right at the top is fear of public speaking more than fear of death or anything else. The estimate is that 77 – 80 percent of us suffer from some form of this anxiety and for some people 30 percent let’s say, it can be crippling and they would do anything they can to avoid having to speak in public. Call it fear of public speaking, or stage fright, the technical term glossophobia

I want to give you seven strategies that can help you overcome stage fright, these are ones that I use to overcome my fear of speaking in public, because I was a pretty shy kid, these are lessons that you might want to apply to private speaking, to conversations you’re having at work, at home, or if you’re just dealing with social anxiety. Let’s get started, did I say my name?

You can’t really get through our education system without at some point being asked to get up in front of the room and present, read something, and you know what it’s like the first few times, you’re shaking, you’re blushing, your heart is pounding, shortness of breath, you talk funny and very formally, you end up getting dizzy, upset stomach, you can’t wait to get back to your seat. Think about that, fearing public speaking more than death, la petite mort… no that’s something else.

I’ve come to love it but the first time I got up on stage I didn’t, as I say I was a shy kid flying under the radar as much as possible, and then in grade 10 I got up on stage, no it was grade 11, I got up on stage for the annual sort of talent show called April antics and I did two skits, two monologues, all by myself out there, and I was so nervous before I went on, and then when I came off at the end there was applause, there was laughter, girls talk to me, interesting.

The second night I bombed, I came off stage and thought I’ll never do this again, what happened? Why did I do wrong? Oh it’s just we couldn’t hear you, you talk so softly, you have a very soft voice, the first night you’re always cruising on energy anyway, but the second night my voice got until I was really talking to myself and the entire school cafeteria on 400 people could hardly hear me, and that’s why they weren’t laughing. Ah okay, so the third night I spoke loudly, I projected as much as I could and I did well and that actually brings us to the first point, and I think it may be for me the most profound and that is…

The Audience Wants You to do Well

They want you to be great, or at least good, whether it’s at a conference, it’s in the boardroom, or it’s on stage, or anywhere, your audience wants you to do well, they’re not out to kill you, they want to especially when we were doing comedy, people paid money, they hired a babysitter, they took an evening off, they went out they had dinner, they found parking, they paid for tickets, they came in they sat, they wanted us to be funny, they wanted us to be hilarious too.

Stop calling it stage fright it’s just the natural anxiety, it’s getting juiced, anyway we go stop calling it a fear of public speaking, your words have power, you know the bride going down the aisle she’s excited, she’s nervous, she’s energized, everybody in the place is they’re all eyes, are glowing eyes, are sparkling, now she could call that terror or she could call that thrill. Big difference, same aisle, same guy waiting at the end, but how do you language it, how do you put it into words, how do you describe it?

Years ago I read that Carly Simon the singer amazing singer had stopped performing live because of stage fright. She was just too frightened to get up in front of the audience, her stomach would churn, her hands would shake, dry throat.

Then I heard Bruce Springsteen being interviewed and they said you can fill arenas why are you doing this, why are you, why don’t you just retire, relax? Bruce said because of the rush, he said my hands are shaking, my stomach’s doing flip-flops, it’s a rush man to get out there in front of all those people. Energized, excited, same symptoms, different way of describing it.

There’s nothing wrong with being nervous about getting up in front of an audience, I mean I still have this little bit of a here we go Ricky every time I get on stage, no matter how many people I’m talking to, it’s normal and I can tell you it passes in five to 15 seconds in my case. The first laugh and I relax.

Practice and Rehearse What You’re Going to Say

Some people say you know run it 50 times, 100 times, it depends, if it’s a play you’re in yeah definitely run it again and again again until you’ve got it locked in, but you can also over rehearse until you’re locked into the way of phrasing and all it takes is some interruption in your show and you’re lost at what you’re going to say.

Practice by Saying It Out Loud

So my suggestion is practice and rehearse, rehearse out loud, that’s the other thing speak it out loud rather than in your head, and just reading it, because as you speak it out loud you’ll suddenly realize that is suddenly awkward speaking, it’s the phrasing, in a sense, okay I gotta rewrite that because it looked fine on paper, I mean I get it but it doesn’t flow off the tongue.

Get Comfortable in the Space – Arrive Early

Arrive a little early or way early, walk around, feel the room, get a sense of the space, get up on the stage, talk to the technical people, test the audio, can they see you, are you well lit?

Do Some Breathing Exercises

Focus on your breathing I’ve done some videos about how three deep breaths can totally drain away stress, you want to get into a positive mindset imagining it going forward.

I knew Jim Carrey, not close but we performed in many of the same clubs and I sort of knew him to run into him way back in the day when we were first starting out in comedy clubs, and he’s done well since I hear.

One of the things he would do was just focus on something until it was the funniest thing in the world and I only learned about this years later reading an interview with him but he focused on it.

What I do remember is when he walked out on stage he came out all excited, like I can’t wait to be here, and a room which was full of cynics, cynical, you know the audience.

If you’re presenting at a business conference or a medical conference probably that isn’t how you want to go on stage. What you might want to be thinking about is ‘What I’m talking about is going to change lives” whatever it is, but focus on the passion.

You’re Just Having a Conversation

Crowds don’t listen individually, people think, well you know I’m speaking to 5,000 people, they’re not getting together as one large ear listening, or hive mind people are listening as one person.

One person, so you’re speaking to one person at a time, if you mess up, if you fumble, you know if you did that in the middle of an ordinary conversation – you stumbled and had to correct yourself nobody’s gonna go and boo, you’re just having a conversation.

Remind yourself that you’re really just talking to one person. I used to look for people who were actually laughing and then try to focus on them, because it was very easy to look down and see the one guy in the front who isn’t enjoying the talk.

This is the challenge, because so many people before they go on if you’re talking to them they’ll tell you what this thing is about and they’ll tell the story and then they get on stage and they go into this train station announcer, let’s take a look at the medications that are available for bipolar disorder, and they’re terrified, or it looks like they’re terrified and it sounds like they’re terrified. It’s really hard to connect with that because you hear that voice when you’re being told on the airplane to sit up and put on your safety belt and so on. You don’t want to hear that for an hour in a talk, or even a five-minute presentation.

The seventh and final one is visualizing that it’s going well. I’ve kind of hinted at this already but you want to sort of rehearse being up there, seeing yourself. You could videotape yourself if you want, yeah tape, yeah that’s great get out your beta.

Anyway you want to record yourself, listen to yourself. I know you may not like your voice, I don’t necessarily, nobody likes my voice, that’s okay.

If you watch Olympic skiers, well one is in the little booth leaning against the starting gate ready to explode out. The next three skiers who’ve been brought up are rehearsing, they’re body rehearsing, they’re visualizing the course. This is a hugely powerful practice in sports.

So those are the seven ways that I overcame my stage fright. Now you may never fall in love with public speaking as I have, performing, giving presentations, but once you get over that stage fright you just might.

Final suggestion, I started out in a little coffee house called the nervous breakdown with my partner Paul Chato doing comedy. I was also working at the Ontario Science Center doing four or five shows a day, again full of comedy but about lasers, believe it or not but I got to practice again and again and again and you want to be able to do that because there’s fewer and fewer spaces to do that.

I’m Rick Green thanks for listening. If you want to become a patron you can find out all about that and all of the benefits that our patrons get for supporting what we’re doing and allowing me to make these videos for you.