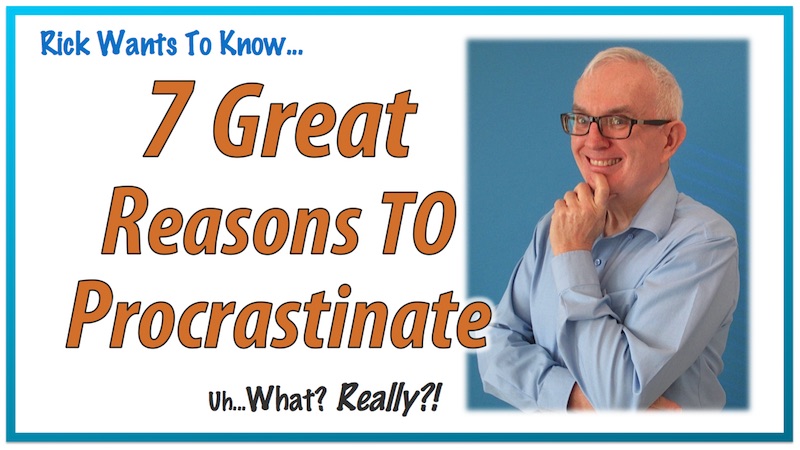 Prone to Procrastination? I decide, “I’ll do it tomorrow.” And then put it off again. And again. I know procrastinating is disheartening, frustrating, and costly. Why do I keep doing it? What is the reason for putting things off?

Actually there are many reasons. When I distinguish why I avoid certain decisions, tasks, or goals I’ve discovered that sometimes there is a valid reason as to why I’m procrastinating. It has nothing to do with fear of failure, laziness, or lack of will-power!”

Are There Good Reasons to Procrastinate?

Sometimes, I know there are lots of bad reasons for procrastinating, fear of failure or even fear of success, so if I do a great job then everyone’s going to expect me to always do a great job, or perfectionism. There’s many reasons, but there are also severe costs, missed opportunities, lower quality work, because you’re in a rush, it can destroy trust in you, it can end relationships, it can get you fired.

Then there’s the cost long term in terms of your self-esteem, your self-confidence, I blew it again! Not to mention there’s the financial setbacks that can happen, the career and financial setbacks, I mean simple as uh late fees or fines because you left it too late, or you have to pay extra, or the sale is over. That said however, could there be in certain situations valid logical sensible reasons to procrastinate? To not do what it is you want to do, or need to do, or want and need to do, let me just say this.  Yes.

Now I know what you’re thinking, you’re thinking “what??!” Stick with me. Now to figure out if you’re procrastinating for a good, or sensible, or logical, or inevitable reason, you have to distinguish what is the reason that you’re procrastinating, and if it is logical, sensible, unavoidable, then maybe you just let that task slide for now and you stop beating yourself up and instead you go use that energy to beat up someone, no, to do something that matters, like working on your model railroad. All right I was gonna put this off, but all right.

Reason #1 to Procrastinate – Waiting on Something You Don’t Have

Reason #2 to Procrastinate – Doubts About a Person Involved

You’re starting to have doubts about the person, or the people that you’re involved with, you have doubts about these people, even if they’re little HO scale people, your initial enthusiasm was there but now there’s that little bit of hesitation, you’re unsure, you’re suspicious, you’re having doubt, you’ve heard some rumors, boy they curse a lot, they’re really aggressive, things don’t add up, they’re smooth talkers.

Maybe it’s a new relationship and they’re love bombing you, it’s one thing if after six months of dating someone says I love you and I want to be with you forever, but on the second date? and if you’re just standing in line at the donut shop and you let the person behind you go ahead and they say that… you know? Well unless they’re really good donuts, because you know I would, that’s someone I would, well I am married but…

Reason #3 to Procrastinate – You Need Different Skills or Knowledge

It might be that you need a degree, or you don’t have the right skill, the right tools, the right knowledge, so maybe you have to hire someone with those skills or you want to change or replace the burned out light bulb in the oven and you’re not sure how to do that, maybe you go on YouTube but otherwise you’re thinking I’m a bad person for not fixing the light in the oven, and you’re not, you just don’t have the right tools, and you don’t know how to do it, and you should probably find out how to do it carefully because there’s a lot of electricity or gas and you know… stuff, it’s bad, it’s bad.

Reason #4 to Procrastinate – You Are No Longer Committed

You know what it’s like, you ride on a SeaDoo and this is exciting, I’m gonna start a SeaDoo company, we’ll rent them out! Then… you know, the summer ends and over the winter you see this ad for charity to help children and you realize boy all that money, like it was twenty thousand dollars, it could transform the lives of ten kids for a decade, and not add to greenhouse gases from the oil, and then you switch your priorities, and then you discover model railroading, you think well you know what those kids adversity builds character.

Reason #5 to Procrastinate – Too Much Mental Effort Needed

The task requires too much mental effort and you’re tired, you don’t have the mental energy, maybe it’s the end of the day, or for me at the end of a television season I would be tired and I take three or four days off, and then I would start working on proposals and get nowhere because I needed more than three or four days off after 120 days straight. This is an example of distinguishing the reason and realizing, actually I do need a whole month off, maybe a month and a half, or maybe I should start this in the morning.

Your original reasons for wanting to do this have vanished or evaporated, for example you had this idea for a home entertainment system that will hold six VHS tapes and automatically changed them up at voice command, and now nobody even owns DVDs let alone VHS, I actually owned a beta, how sad is that? Beta.

Reason #7 to Procrastinate – It Will Take Too Much Time

It’s simply going to take too much time and get more basic on a logistic level, then it’s just going to take too much time, and I don’t have the time because if I start doing this then other stuff is going to have to fall by the wayside because I can only do so much, and then I’ll have to go back and do that and this will fall by the wayside, or more likely with me I’ll get more enthused about something new, something novel, a new person, a new opportunity, and I’ll pursue that and there’ll be another.

It might be it’s simply not the right time for you.  I am going to ride my bike across the country from coast to coast, but first I probably should see if I can still ride a bike, and then get a bike, and there’s other stuff in the way, maybe I’ll do that when I retire and it may be a dream that you let go of, that’s why they’re called dreams because they come and go.

I’ve noticed that with my dreams a lot of them come and go but some of them stick and those are the ones that stick for a reason, because they’re right for me. Oh I’m turning into the buddha here, so there are some emotional reasons, lots of emotional reasons why we procrastinate and we’ll talk about those, and I have talked about those in other videos, but there are also some reasons that fall in between the logical sensible and the emotional, not necessarily logical, not based on anything.

For example a common one is, I don’t know where to start, I’ll make a separate video about that, equally common but rarely recognized is the goal is really kind of vague, or very vague, yeah I’m gonna get in shape, what does that look like? I mean you’re already in shape, you’re in bad shape, you’re in poor shape, you’re in horrible shape, you’re blobby doughy with a big round of donuts, of doing that…

I should wrap this up quickly, so there sometimes are, not always, probably far less often than the emotional reasons, but sometimes there are logical sensible reasons to procrastinate, in fact I was going to put this off until tomorrow and I thought I will do it now, and I did it now, and I got a good start on this.