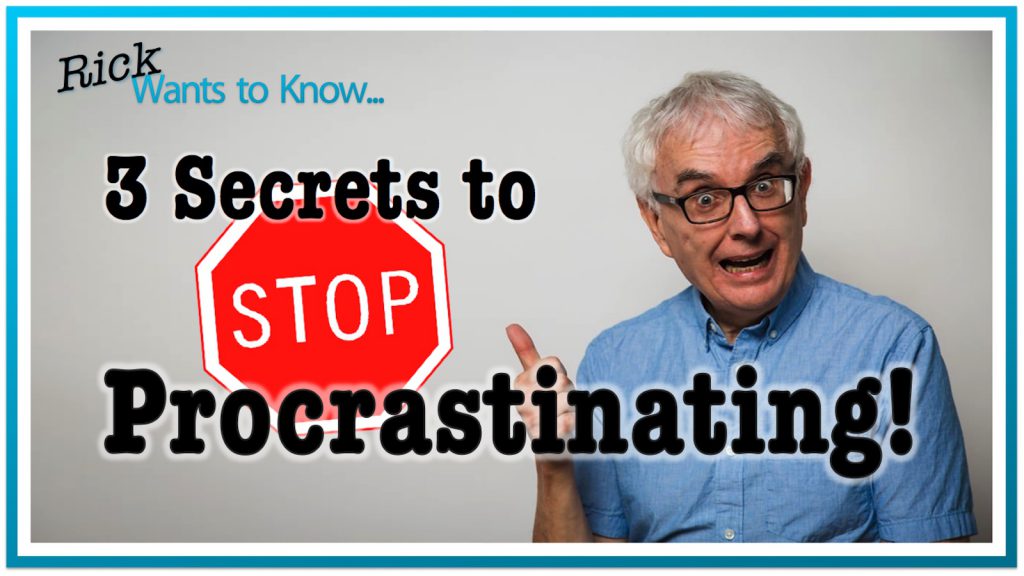 Why do I accomplish some of my To-Dos, but delay, avoid, dread, and procrastinate over others? I always assumed the problem was me. Turns out it wasn’t.

It was frustrating. I’d put off the urgent, important, or meaningful tasks, unable to buckle down and start, until the day ran out. Then I’d vow, ‘I’ll get to it tomorrow… First thing… Or one of the first… Or…’

I couldn’t understand why I’d avoid simple jobs and manage to do other tasks quickly and easily. Even gladly!

Then I learned some simple reasons that instantly explained why I kept putting off some tasks and easily tackled others. Turns out, they were not all tasks. They were not all simple To-Dos. They were much more than that, a sequential stream of tasks. Understanding these distinctions made a big difference for me. I suspect it will for you as well.

Hi I’m Rick Green and I want to know how to cure procrastination, specifically around tasks that feel overwhelming, because often I would give up or feel so overwhelmed by a task that i’d never even start, and I couldn’t figure out why until a few years ago. This simple secret combined with a second secret changed everything for me and it led me to a third secret.

Now every book I own on productivity and procrastination and organizing says have a to-do list and I would, I’d make a to-do list first thing every morning, then start my day. Now the experts say just have a few items on your list but some days I’d have 15 items and get them all done, 15 to-do’s. Another day I’d have three and only finish one or barely start it.

Now this doesn’t work on everything, if you’re procrastinating on whether to trust that letter from the Nigerian prince or start a new diet that involves eating only reptiles you know procrastinating may be wise.

We procrastinate for a lot of different reasons, in fact a few years ago I worked with doctor Ari Tuckman on a project that explored about probably 20 reasons we procrastinate and how to address each of them and it turned into a series of great webinars, perhaps one day a book… one day.

We keep putting it off because of other stuff, which I know is ironic and moronic but it proves that sometimes we procrastinate around things that we really find interesting, or exciting, and I know for Ari Tuckman the thought of collaborating with me must have been pretty exciting.. what?

So what is this simple secret? Why did I do some of my to-do’s and not do other to-do’s? Why were some tasks never completed? Because there weren’t to-do’s or tasks they were projects, projects. Big difference, a to-do is something you can do but a project is for example, let’s say my to-do list includes start exercising… theoretically.

So exercise is a sensible, wise, to do, and it’s one I’ve been meaning to do most of my adult life, and I have actually started many times, in fact a few years ago I started and stuck with it. I was doing great, going to the gym three times a week, quickly doubling my arm strength, my leg strength, and then unfortunately an exotic animal meat market in wuhan shut down the world.

Why didn’t I continue exercising at home you might ask, because I asked, I put it on my to-do list every day but starting to exercise at home is not a simple to do even though it was on my to-do list, like make breakfast, or eat breakfast, or clean up after breakfast, three separate to-do’s, but starting exercise programs? 30 steps, Finding the weights, finding the exercise band, clearing a space, finding my running shoes and if the running shoes are worn out, whoa…

Okay the first step is going to be a trip to the sportswear store but that’s a dozen steps starting with driving to the store, no wait, searching for shoe stores near me, even firster finding my phone and checking where’s the… there we go, okay I can’t believe the guy did that, wow that’s a smart dog, those Kardashians, oh man what an idiot, oh that’s me.

My point is any task, appointment, job, to do, chore, or errand may sound simple, I mean clean the car that’s three words, buy groceries – two words, vote – one word, but those actually involve numerous steps any of which might be easy but together become a specific sequence of separate to do’s.

Exercising at home, that’s a project, so this is the first secret don’t confuse tasks and to do’s with projects. I did, I’d make a daily to-do list, as I say actually using the today I will channel in our patron chat rooms, call David – good, make the bed, make a new video, well wait that one is about 80 steps.

My daily to-do list was this jumble of simple to-do’s and big projects. I suspect we all make this mental mistake, ah this morning I’m going to purge my wardrobe, can you see why so many of your to-do’s never become tadas and they end up as two didn’ts? They’re actually complex multi-step endeavours and the first to do is to figure out what to do.

So my simple sensible goal to start to exercise starts as an exercise in prioritizing the steps or even recognizing that it’s many steps and many of those steps have smaller steps and that brings us to the second secret.

I’m exaggerating a bit but you get the idea, you’ve got to break it down into actions, get in shape, see friends, call so so-and-so, god, uh friends.

That brings us to the third secret ,focusing on actions isn’t just for logistic heavy goals like going on vacation or moving across the country, it can help with upset, anxiety, depression, even with relationships, let’s say heal a rift with a friend, say your friend Anime what a wonderful goal, an admirable intention, but what is an action you can take? Simple. First call Anime, great, okay first find my phone, good but then I don’t have her number, okay so next first step get her number. How? Call Simon, Simon is her brother, I get voicemail. Next step? Leave a message, next step, waivers and so on.

I find focusing on actions makes things so much easier, I mean heal a relationship can feel intimidating and dramatic, whereas finding a phone number, a lot less intimidating. It’s an action, if I take an action I move forward.

And yet even now knowing all this I am surprised at how many good intentions remain just that, because I haven’t recognized they aren’t actionable, tidy the house? Um yeah okay. I don’t just pick up the dirty towels, that’s one thing I can do and in fact the child could do that which is why this is such a great way to help kids, and that’s a kind of bonus secret, giving them clear doable distinct actions.

Tell your six-year-old tidy up your room so it looks nice? They already think it looks nice with 17 stuffed kitties heaps, of Duplo blocks, and open jars of finger paint, everything’s handy. Whereas can you put the big blocks in the bucket. Doable. Good job! Can you take all the small blocks and put them in the bucket? Great job!

To sum it up… finally.

Whether you’re a parent, a manager, trainer, supervisor, teacher, you just like bossing people around, when you make requests make them actionable. Whenever I’m stalled over a task that feels amorphous I recognize it’s because I haven’t made it actionable. No wonder I don’t take action. Speaking of relationships my wife is ordering pizza, so now step one, my next to-do, my next task, is to go pick it up… okay no, first it’s to find the keys, and then my coat, and then, oh no actually it’s first to wrap this up.

Thanks to our patrons whose actions ensure that these videos are doable and they get done, and of course they allow us to host webinars, and to have our patreon chat rooms that are always up and humming.