10 Signs You Don't Have Depression 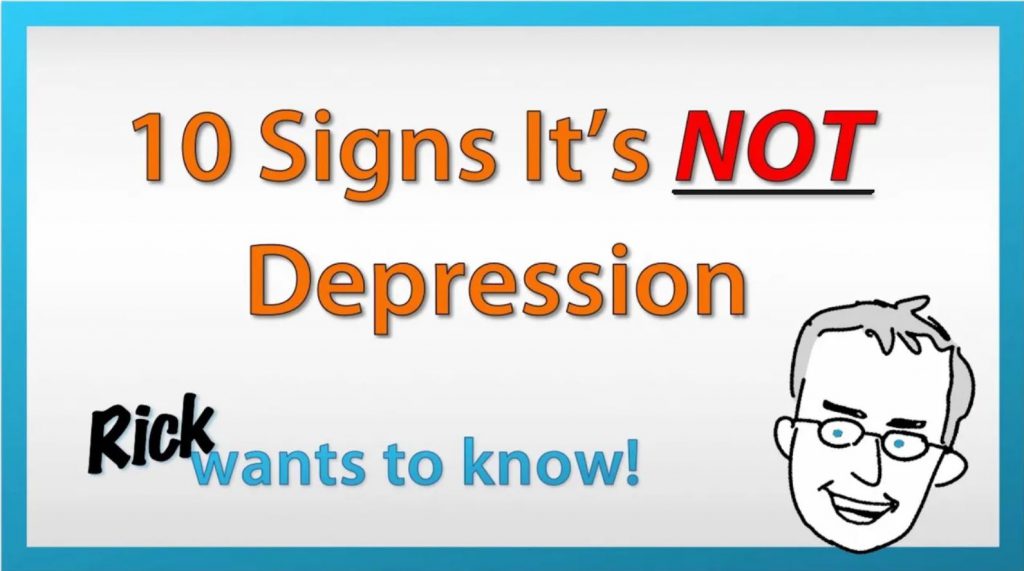 The past few years have been tumultuous, worrying, and depressing. Events, both global, career-wise, and personal, have challenged my normally upbeat mood. While I’ve felt depressed at points, I know it’s different from a diagnosis of Clinical Depression.

Been there. Done that. More than once. Not fun.

If the past few years have been a struggle for you too, you may be wondering what are the symptoms that it’s full-blown Depression? To keep things positive, here are 10 signs it’s NOT Depression. (Vote For Pedro)

Depression is classified as a mood disorder as in clinically depressed, meaning you’re seeing a doctor at a clinic and you’ve received a reliable diagnosis of depression.  It’s to the point where you are suffering, but here’s the thing you may not realize that you are suffering.

Depression can come on so slowly so gradually you don’t even notice what’s happening.  Now to be clear I am not a doctor although I did play a nurse in a Frantics comedy skit, my bedside manner was yeah so so.

So at points in my life I have been down, sad, feeling kind of depressed, for any number of reasons, good reasons.  Usually.

I’ve also been clinically depressed a few times so I have some first-hand experience or first head experience.

Now to make sure that I’m not talking through my hat I avoid wearing hats and I consulted a list of depression symptoms from sources that I trust.

Symptoms of depression can include:

The lists of depression symptoms are fairly consistent that’s what I found, they don’t vary much from site to site.  That said I found these lists flat, even kind of abstract, when you’re depressed you’re not thinking or feeling things in a clear balanced way so you could read any one of these symptoms and go “um yeah, I don’t know, um sort of, I hadn’t noticed” they can seem ungrounded, so let’s ground the symptoms in a real life experience one that we can all share as human beings, The Queen’s Gambit.

Now in 2020 this amazing Netflix series about an orphan who becomes a chess prodigy garnered 60 million views in one month, that’s like half the population of the world… okay it’s one percent less than… it’s still it’s impressive.

If you haven’t seen it I’ll avoid spoilers but the sequence on the planet mars was amazing and who knew Khloe Kardashian could act, huh.  If you missed it feel free to substitute a new program you love because you might be watching this later, so maybe it’ll be Sharknado 5 the dust devil’s revenge or Napoleon Dynamite 2,  I want a sequel, sorry.

Also since depression only ever affects a percentage of the population and even for most of us who have experienced it the depression tends to come in bouts.  Most of my life I’ve been happy and hopeful I’ll be you know a little anxious and scattered and worried all the time but it’s not there forever.

So here are 10 signs that you’re not depressed because most of us aren’t depressed most of the time.

Sign #1 – At your book club, a barbecue or dinner with friends everyone’s talking about the Queen’s Gambit.

That’s a good sign that means you’re out seeing people, you’re not isolated, you’re keeping busy.  I know when I was depressed I tended to shut down and isolate, and yeah… you go honey, I’m too tired, that kind of thing.

Sign #2 – When people ask if you’ve seen the Queen’s Gambit you say “Not yet, don’t say anything”

This is good, as opposed to “No not yet, stop bugging me, I don’t care about some stupid”.  You see depression can make some folks cranky, irritable, prickly, short tempered.

Sign #3 – You say “No spoilers” because you’re planning to watch it.

You’re looking forward with anticipation not with dread or with ennui, or worse no future.  With severe depression someone may start wrapping things up you know and that can be a warning sign that they are planning to check out permanently.

If you know someone who’s doing that or if that’s you call a hotline, call 911, call someone you trust who isn’t dismissive or go to a clinic, please for me.

Sign #4 – You watch the Queen’s Gambit series over four evenings in a row.

That’s good that means you’re getting normal sleep, depression interferes with sleep, so you’re not up at 2:30 in the morning watching the episodes.

That means your memory and concentration are good, you’re following the story. For many of us depression creates a kind of a fog, unfortunately that fog makes it harder to see the world and to see yourself in a logical sensible balanced way. In fact the first ones to recognize that we’re not our usual selves are often friends and family, unless of course you isolate which is a problem or you stop seeing friends and family, so there’s the catch 22.

Sign #5.1 – You watch the Queen’s Gambit and you laugh, you cried, you were moved, there wasn’t that flatness… “whatever”

I can tell you when I was depressed the listless, exhausted, done like dinner despair, it seemed like a sensible reaction to my life at that point. All I could see were the negatives.  I get stuck on regret or bitterness, bleakness, oh if only, if only, I should, it was only later that I could see that it was as if I had been wearing a spacesuit that had isolated me from joy, from feeling wonder and appreciation and gratitude and it wasn’t a sudden dramatic shift.  The last time I was depressed it was more like “You know the kids are doing okay, I got nothing left to say, you know what I’ve had a good run”

Luckily I never got to “The world will be better off without me” believe me no it no it won’t be, trust me if you have even fleeting thoughts like that or ones like I had call someone, get help, get it checked out.

Sign #6 – You sat there watching the Queen’s Gambit riveted, you weren’t shifting.

You see there can be a strong physical element to depression, you may feel sore, cramps, aches, headaches, and there could be digestive problems too.  I was actually shocked to learn that our stomachs have neurons and they’re connected to our brains, there’s that gut feelings, right?

Sign #7 – You keep thinking about the Queen’s Gambit when you’re at yoga or at the gym or just a pickup game of basketball.

Good sign, that means you’re getting outdoors, you’re doing yoga, pick up game of basketball, all fun activities, group activities and they produce all kinds of feel good chemicals.  In fact a ton of research has proven that for some folks exercise can be as effective as medication.  The catch 22 is that with depression the thought of starting to exercise, which means finding a gym and seeing people and going somewhere and getting out of the house, which means getting dressed and that means finding… it’s too much, forget it.

Sign #8 – After binge watching three episodes of the Queen’s Gambit you were starving.

Sign #9 – After watching the Queen’s Gambit you went out and bought a chess set.

That’s a good sign, that means you have motivation you’re wanting to learn rather than “Ah it’s complicated, why bother” oh and you bought a cheap used chess set to start, that’s a good sign you’re not recklessly spending on some expensive gold-plated chess set that you hope will make you feel better.  When you’re in depression you may end up spending recklessly, having multiple partners, drinking, taking drugs, taking chances, anything to feel good.

Sign #10 – You actually tried playing chess and you decided “yes, not for me” rather than saying “oh this is too hard, I’m an idiot, I’m dumb, I can’t learn anything”

No you just don’t like chess but you still enjoy playing bridge or making jewelry, gardening, or think about it model railroading, just saying just saying.  In fact I’m ashamed to admit that at the height of my depression I lost interest in model railroading.

So there you go if you’ve never suffered from depression hopefully you now have a better sense of what it’s like for people who do suffer from it.  If any of this sounds familiar I have good news it is so treatable, depression is so treatable.

I’ll look into some solutions like cognitive behavioral therapy and we’ll do more about exercise, the power of socializing which is amazing.  We’ll address that in other video.

In the meantime thanks for watching and thanks to our patrons for making this video possible, and if you want exclusive previews to the new videos and a say in the topics that we’re going to cover as well as being a part of exclusive Patreon webinars and patron only chat rooms consider becoming a yes patron through Patreon.

I’m Rick Green, please take care and remember as we used to say on the Red Green show “we’re all in this together”.

Perks include 2 live chat webinars with Rick & other guest + early access to new videos + a say on new video topics + a FREE copy of ADD & Loving It?!